This drill is effective for both straight and breaking putts. I have personally responded well to this training exercise. The key attributes are:

Laser Optics version I, originally developed in 1997, has been the most effective device in golf for assessing putter alignment for over 20 years. Why is it so effective? Because it allows an instructor/caddie/etc. to measure putter alignment under normal visual conditions with the player's putter and golf ball. Nothing attached to the putter to disrupt or influence visual alignment.

The high power green laser projects an intense point which can be seen in the bright sunlight. LO v.I is provided with a handy target backboard. The laser is mounted on and calibrated to triangular laser base with three base legs. The front leveler leg can be adjusted up/down to control vertical projection point. Square the base to the putter face and the point shows face aim. Or, remove the front leg entirely, square the base to the putter face, and simply tilt the base up/down. By tilting the base, the laser point will trace the aim line clearly on the putting surface. This method requires no target backboard, and can be performed on any putt, straight or breaking. 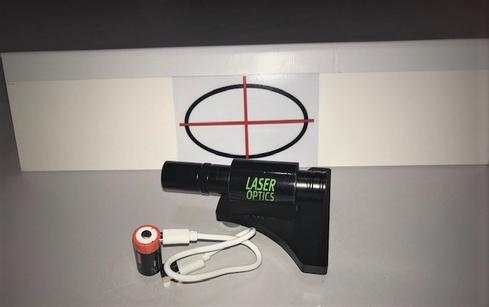 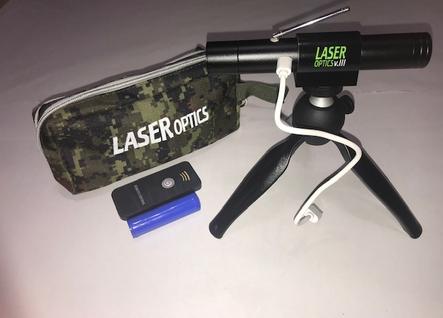 "The Ladder of Success" drill, submitted by Coach Frank Hesson.

Laser Optics version II has been discontinued and replaced by version III. 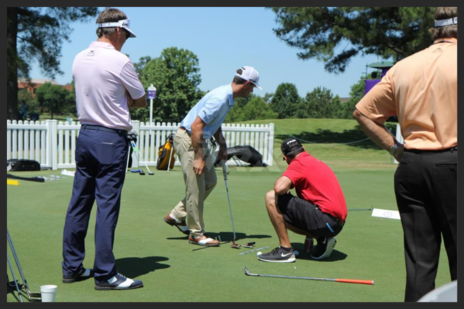 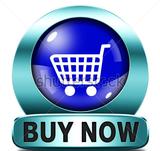 Regardless of technique, one of the skills to great putting is the instinct to putt your line. Imagination, visualization, and the instincts to accurately putt to your perceived path are the common threads among great putters.Laser Optics is the perfect tool to help develop your start line instincts.​

Laser Optics v.III Training Model is a high-power green laser with a specially developed lens cap that projects a solid line on the putting surface. The Power ON/OFF button with wireless remote allows for both manual and remote operation of the laser. The wireless remote allows the golfer to strategically operate ON/OFF for setup and visualization training. V.III is exactly what we envisioned this product would become when we started its development a couple of years ago.

Improvements in the LO v.III include:

The "Cone of Safety" is such a great configuration, we have put together the ideal Laser Optics package to equip you for this training drill. The Laser Tandem Kit has great value and includes:

Home of the Putting T-Bar and Laser Optics

Below are 3 videos demonstrating the "Cone of Safety", the range of start lines.

Making putts is hard. The overall probability of making a putt from 10' on the PGA Tour is roughly 38%. We have presented a very good example below. Three identical 10' putts, 12 stimp, die in the hole putt speed.

The LO v.III Training model is a simple design, targeting the individual golfer for ease of use. The laser is mounted atop stable tripod. The solid line projection is used for start line, stroke accuracy, and visualization training. Place the unit behind the target and project line back at golf ball. Or, set it up from behind and project the line over and atop the golf ball and extend out front for start line. Both methods are great visuals.

We offer a couple of Combo Kits at special pricing, including:

Visit The Putting Store, or click the BUY NOW button below to purchase.

International Orders, please email your Name, Billing/Shipping Address, Phone Number, and Product you would like to order to rwright821@aol.com. We will quote USPS Priority International shipping to your country and invoice you via Paypal.